How does a gaming laptop with the combination of top-of-the-line specifications on paper perform in the real world? Here is our review for the Asus ROG Strix SCAR 15 2021 gaming laptop. 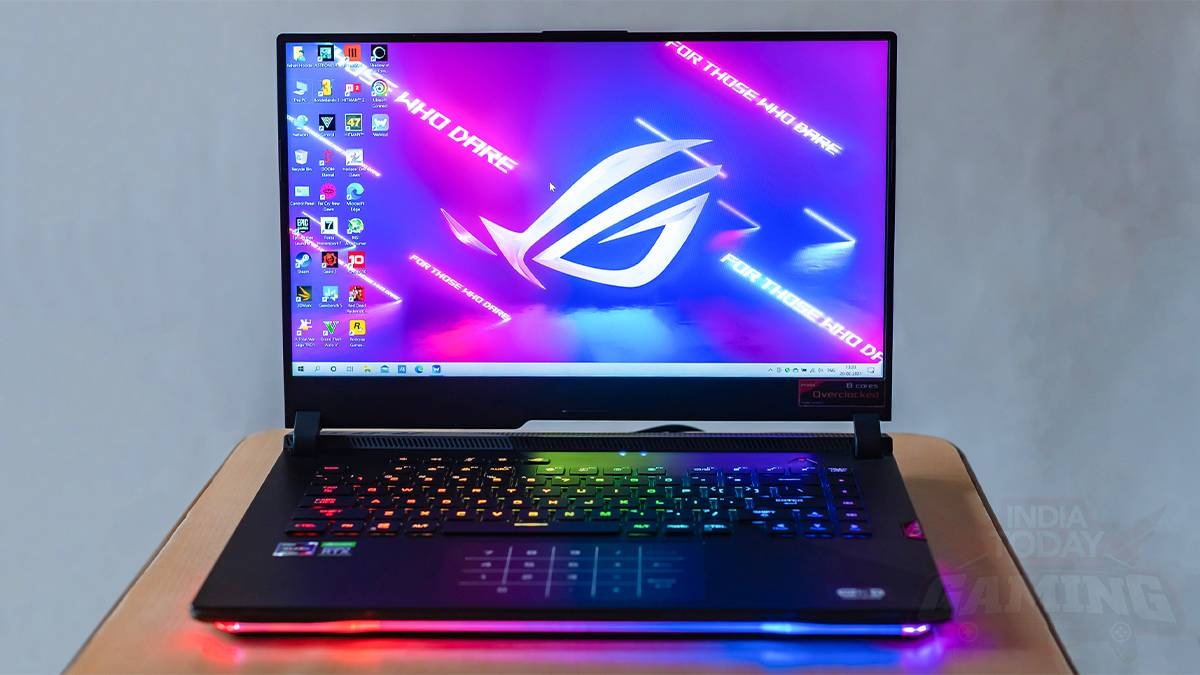 Asus ROG has just launched its latest lineup of gaming laptops in the Indian market. As previously noted, the company announced its ROG Strix G15, G17, Strix SCAR 15, SCAR 17, and TUF A15. Besides, the company also unveiled its ROG Strix GA35 gaming desktop. These announcements come just about 1.5 months after the initial announcement at CES 2021. As we stated in our CES coverage, Asus is going almost all in with AMD Ryzen 5000 series this time. We were quite surprised with such speedy announcements as usually the new lineup takes months to reach India after the global launch.

Considering how Ryzen 3000 series laptops performed in 2020, we were eager to see what the 5000 series laptops bring to the table. The inclusion of the Nvidia GeForce RTX 3000 series GPUs to this mix made the ROG 2021 lineup quite impressive on paper. A few weeks before the formal launch announcement, Asus India shared its ROG Strix SCAR 15 2021 gaming laptop with us. We spent some quality time with the laptop, trying to push it to its limits. How does a gaming laptop with the combination of top-of-the-line specifications on paper perform in the real world? Here is our review for the Asus ROG Strix SCAR 15 2021 gaming laptop. The Ryzen 9 variant with RTX 3070 will be available on several offline and online channels on the launch date. This means that interested buyers can head to Flipkart, Amazon, exclusive offline Asus Stores, and more. The review variant is expected to land soon in the Indian market. Coming to the main event, the Asus ROG Strix Scar 15 G533QS 2021 performs admirably well in gaming. The laptop offers anywhere between 80 to 180fps in high to ultra-quality graphics depending on the title and resolution. This puts the ROG Strix Scar 15 in a league of its own when it comes to gaming performance. What is more impressive is the thermals that the laptop managed under maximum load during prolonged gaming periods. Our unit came with a 15.6-inch IPS panel with QHD resolution and 165Hz refresh rate with a 3ms response time. The AMD Ryzen 9 5900HX and Nvidia GeForce RTX 3080 combination managed to take almost full advantage of the display panel. Scar 15 gave one of (if not the best) frame rates among all the laptops that we have ever tested. The laptop offered impressive performance across multiple AAA titles during our review period. Revisiting our testing process, we tested 12 titles on the Asus ROG Strix Scar 15. These titles include Assassin's Creed Valhalla, Control, Borderlands 3, Doom Eternal, Far Cry New Dawn, and Forza Horizon 4. The list continued with Gears of War 5, Grand Theft Auto V, and Hitman 3. Our testing suite also included Red Dead Redemption 2, Shadow of the Tomb Raider, Troy A Total War Saga.

Editor’s Note: Results in the game benchmarks are from the default, out-of-the-box graphics settings. You can get higher or lower FPS based on your preference. This is the section where the Asus ROG Strix Scar 15 shines likely due to the CPU and GPU combination along with the liquid metal treatment. Out of the box, under maximum, sustained load, the CPU touched a peak of 95.6 degrees Celsius. Besides this peak, the 45W TDP Ryzen 9 5900HX maintained an average temperature of 82.4 degrees Celsius which is one of the best results that we have seen in a long while. Keeping aside the CPU, the GeForce RTX 3080 also maintained 82 degrees Celsius under continuous load. This is especially impressive considering we did not make any changes to the fan or performance profile of the laptop. The second fan is located under the WASD keys to ensure that the keys remain cool while gaming which works as per the claims.

The second important aspect of this section which Strix Scar 15 navigated with flying colors is the fan sound. Fans on the laptop did get somewhat loud but they were not unpleasant or extremely distracting like the competition. It certainly did not feel like the laptop was going to take off and fly away even under heavy load. One does need a pair of earphones to drown out the noise under maximum load. It also means that users can make changes to the fan curve and performance profile to achieve even cooler temperatures. 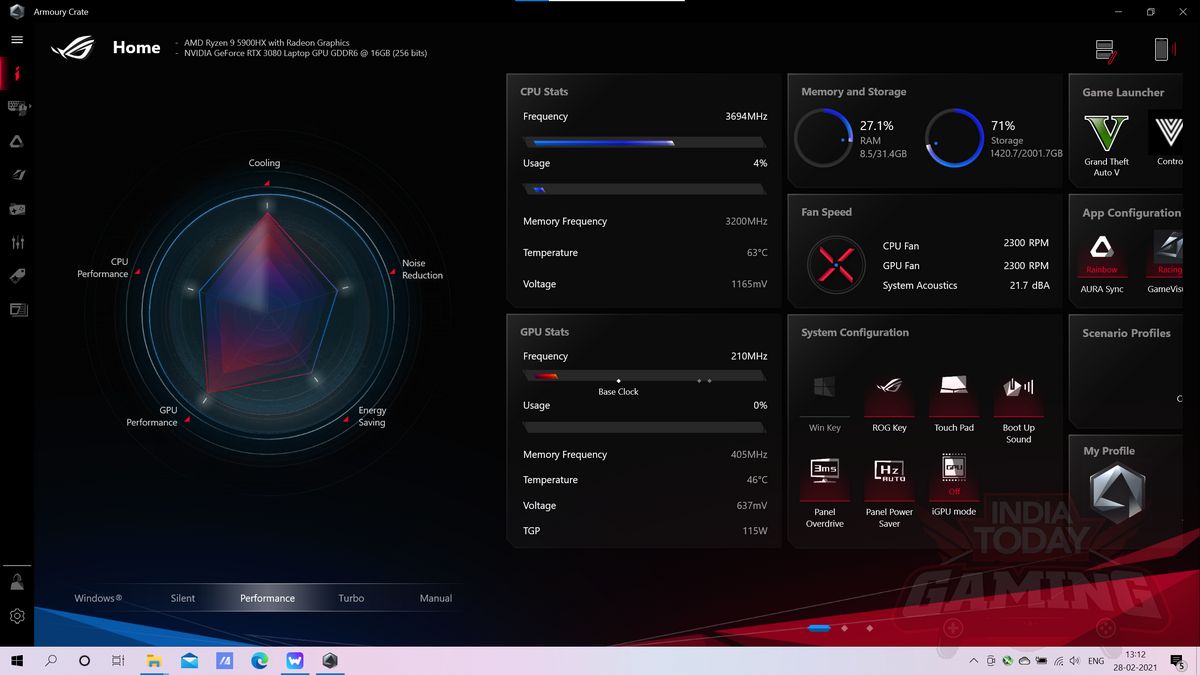 Like all Asus ROG gaming laptops, users can tweak the performance and fan profile in the Armoury Crate app. This laptop is set at the “Performance” setting out of the box. Other profiles available in the software include Silent, Turbo, and Manual. The areas surrounding the keyboard did warm-up but it is nothing to worry about. The bottom side and the exhaust area also got hot but still within tolerable limits.

The Asus ROG Strix Scar 15 follows in the footsteps of the Zephyrus G14 gaming laptop that launched last year. Unlike most gaming laptops currently available in the market, the Ryzen 5000 series products offer the best of both worlds. This means that the laptop offers the performance of a gaming laptop and the long battery life of a business laptop. It is because of the power efficiency of the 7nm-based AMD Zen 3 Cores along with the integrated Radeon GPU. The laptop uses the Radeon GPU for light graphics requirements during general use and only using the Nvidia GPU for heavy tasks. Strix Scar 15 offered us about 7 hours of battery backup on general use at 75 percent screen brightness. This included a lot of web browsing, video consumption, and continuous writing. One can likely get better numbers by turning the brightness lower and switch the RGB strip off. However, this battery backup drops to about 1.5 hours of gaming on battery like any other gaming laptop. One can likely get better backup with the FHD variant of the laptop. It took us about 1 hour and 35 minutes to charge the 90Whr battery from 0 to 100 percent with the included 240W AC Adapter. It is also worth noting that the laptop also features Type-C charging through Power Deliver 4.0, unlike previous AMD Ryzen-powered laptops. 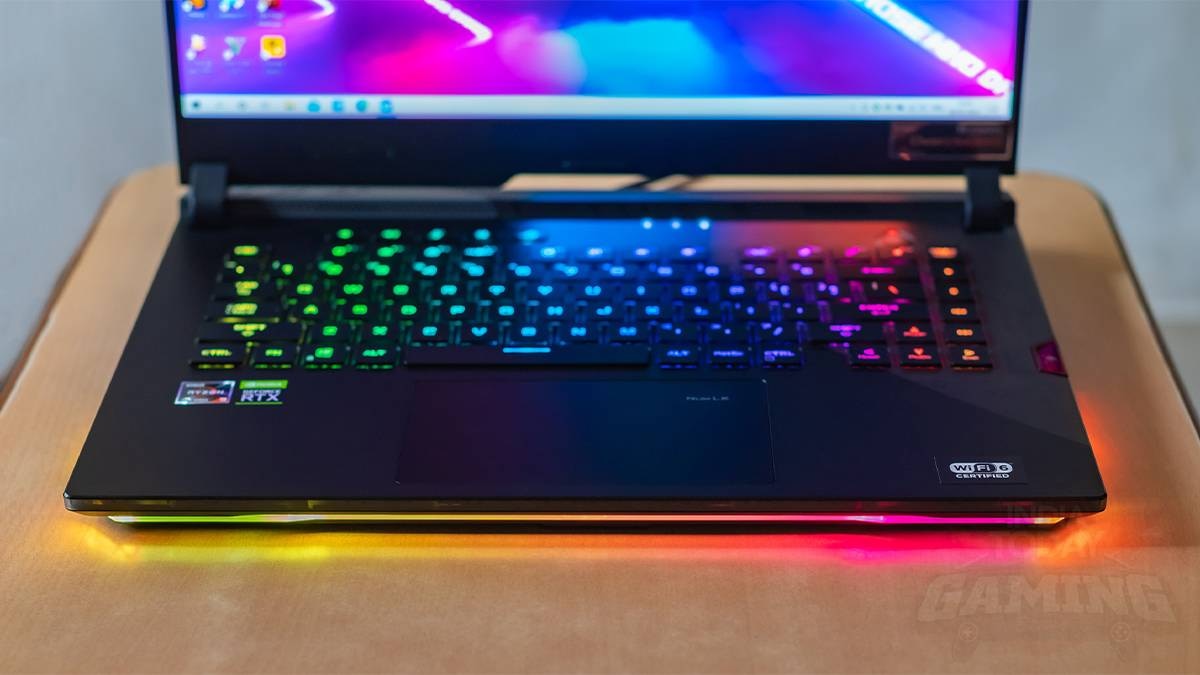 There are two highlights of this section, the impressive, flashy design of the ROG Strix Scar 15 and the keyboard. Talking about the design first, the Scar 15 builds upon the design from its predecessors. Asus took a lot of elements from the 2020 Scar lineup, the Zephyrus G14, and even the work it did with BMW. The company mixed all these elements to craft an impressive, somewhat unique design which is a definite crowd-puller. We should note that it is different but not far apart from the rest of the Strix Scar lineup. 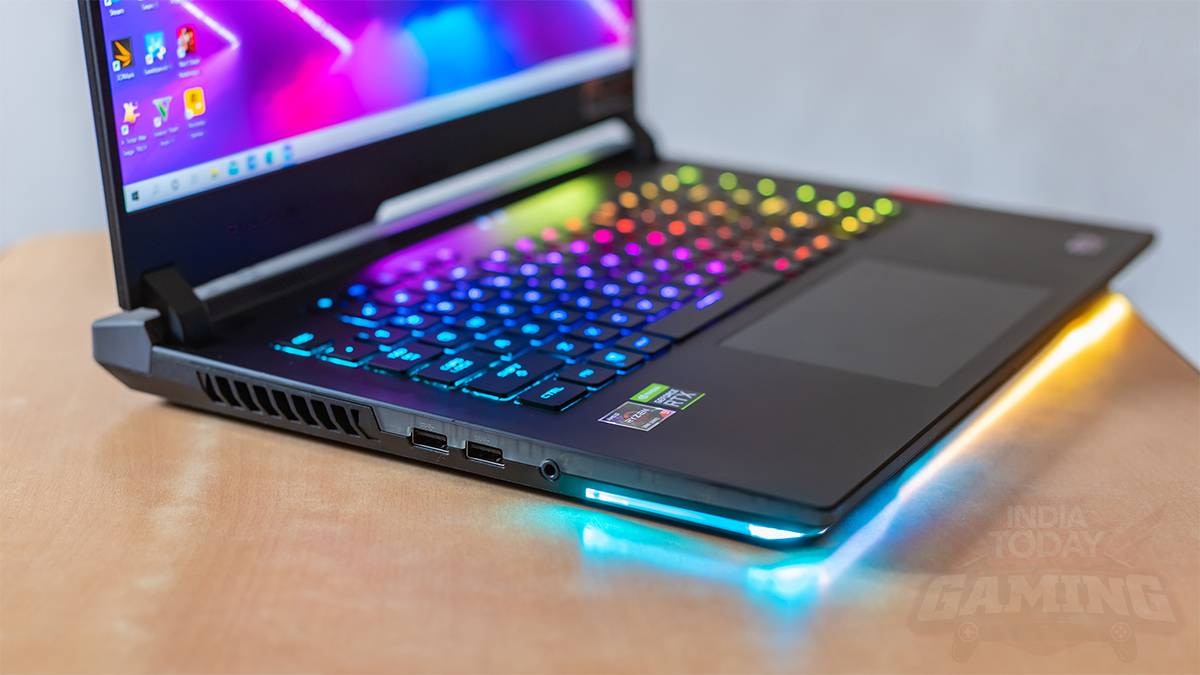 Overall, the design is cleaner and features some degree of customization with new “Armour Caps” and an updated, higher-density Aura Sync LED strip. Buyers will get two additional color options for the “Armour Caps” in the box along with the option to 3D print their own. The magnet-based mechanism here ensures that the caps don’t fall off in daily use and storage. The company has also added a translucent surface on half of the keyboard to make things appealing. 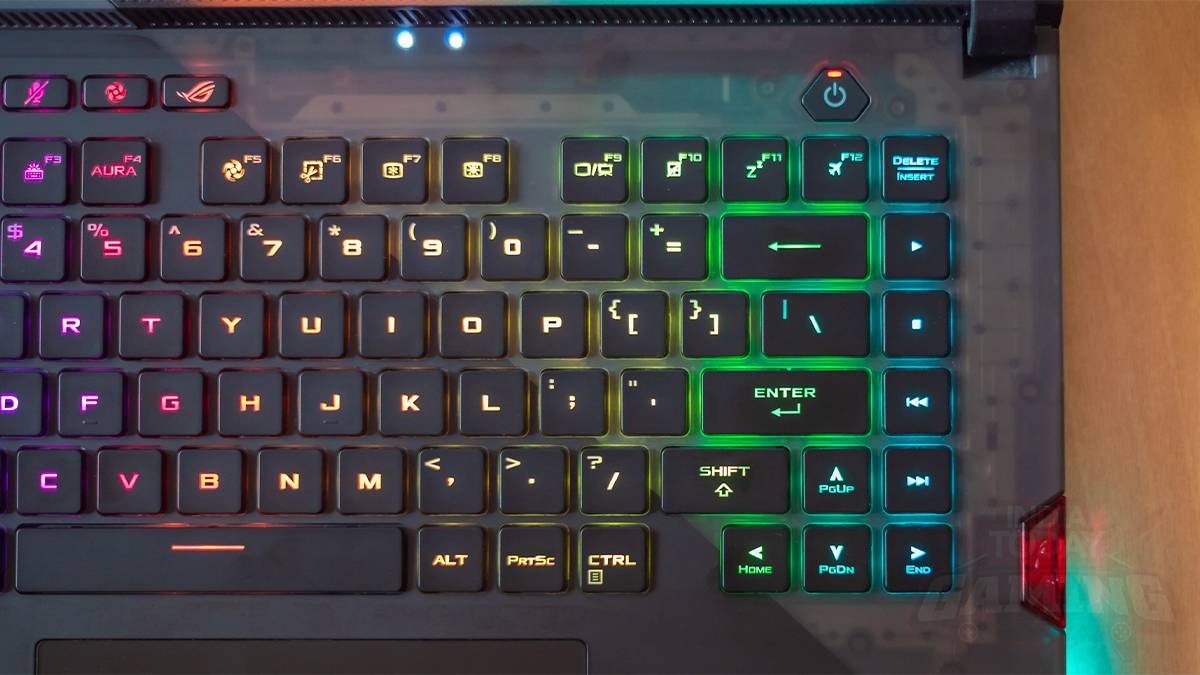 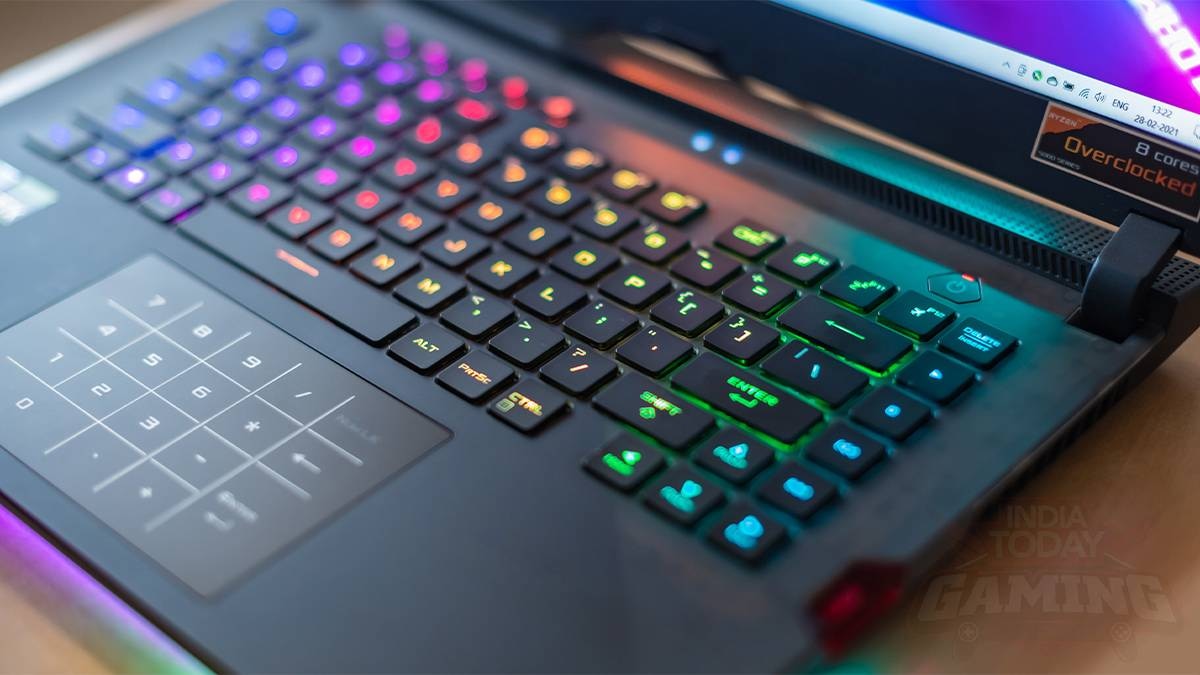 As mentioned above, the Strix Scar 15 keyboard is the second impressive (possible dark horse) aspect of the package. Beyond the usual per-key RGB feature that we have seen in other ROG products, the Scar 15 comes with Optical Mechanical switches which offer a perfect balance of actuation force and feedback. These switches offer slightly longer travel distance along with curved caps for better user experience, and use light to detect the accuracy of the keypresses. The switches, keycap design, and keyboard layout ensure that Asus can compete with the best in the market from Lenovo and Dell. 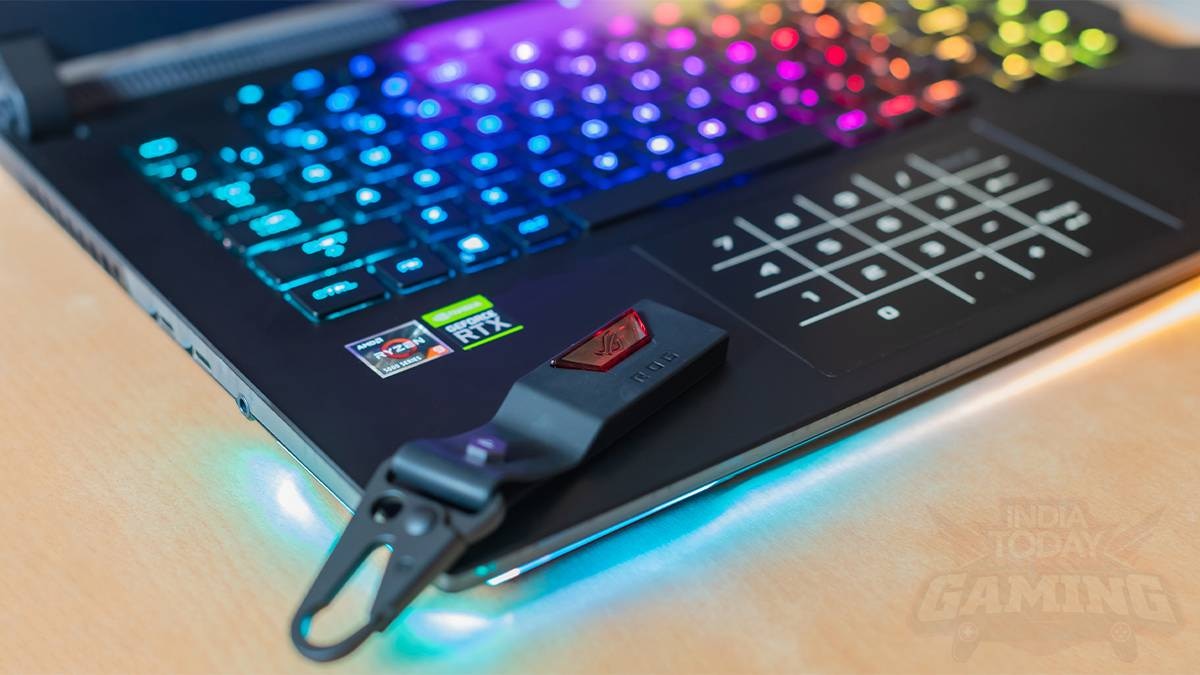 Asus has also increased the size of the touchpad on the laptop by 85 percent as compared to its predecessors. This larger touchpad sports glass materiel with a matte finish for increased comfort with the usual, integrated number pad feature. This comfort complements well with the keyboard to offer one of the best input experiences that we have seen in a while.

Moving beyond the touchpad, the laptop also features four speakers (two tweeters and two woofers) with support for Dolby Atmos. The quad-speaker setup offers decent, full sound while consuming content or listening to music. Overall, the experience is good, but it still has a long way to cover to reach MacBook level output. Given the considerably lower amount of fan noise, one can easily use these speakers to drown out any residual coil whine while gaming. We also get two-way AI-powered noise cancellation for voice chat during multiplayer games. ROG Strix Scar 15 is one of the first gaming laptops to feature an IPS display panel with a 2K resolution. As per the specifications, the panel also features a 165Hz refresh rate along with a 3ms response time. However, the impressive part is likely the resolution and the 100 percent DCI-P3 coverage along with support for Adaptive Sync. In addition, it also comes with 300 nits of peak brightness. In practice, the Scar 15 produces vibrant colors with great contrast and deep blacks. The only thing we can ask for is a panel with higher peak brightness and HDR support. 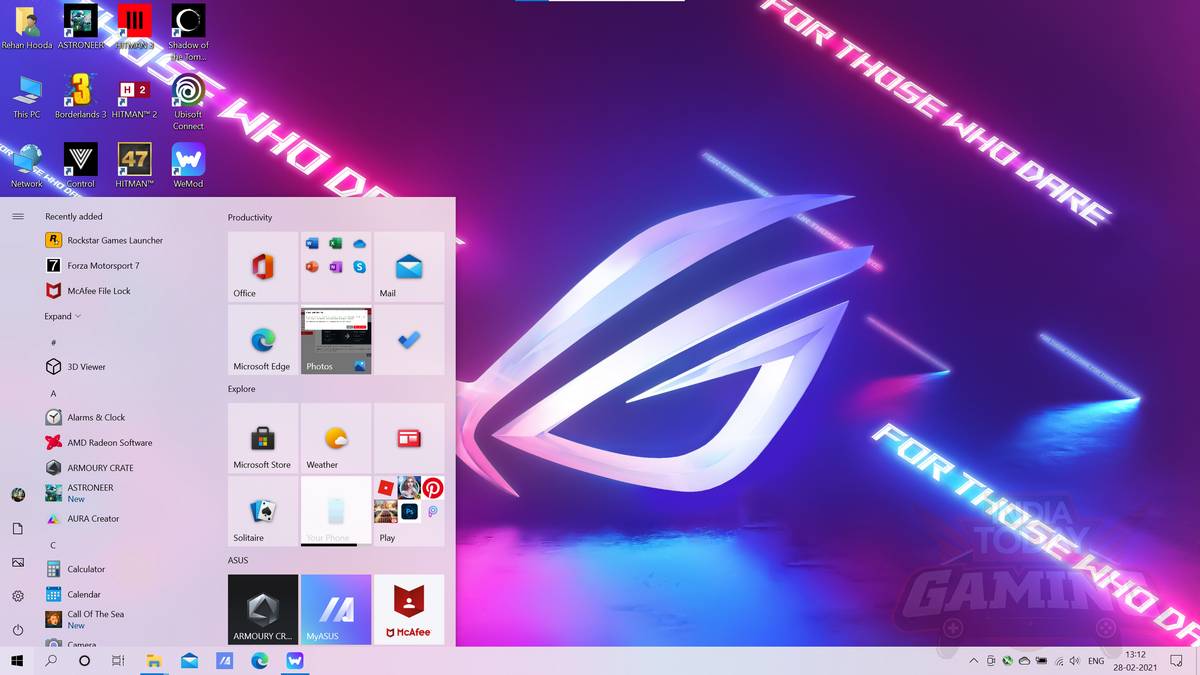 The laptop features Windows 10 Pro with some amount of pre-installed bloatware like McAfee on the software-end. We also get Asus Armoury Crate to handle Aura Sync, performance profiles, overclocking, and Keystone features. The laptop also comes with the MyASUS app for driver updates, product registration, warranty, and more. Other elements of the laptop including plenty of ports, Wi-Fi 6, Bluetooth v5.0, Keystone II for quick profile switching, and a shadow drive work as intended. The company has also included a 1080p webcam inside the box to go with the occasional video calls for gamers.

The Asus ROG Strix Scar 15 sets a new benchmark for gaming laptops in the Indian market. Ryzen 9 5900HX and Nvidia GeForce RTX 3080 play to their strengths while delivering industry topping performance. In addition to the CPU and GPU combination, the company also impressed us with the high-refresh-rate 2K display and the Optical Switches on the keyboard. Strix Scar 15 continues with an impressive battery backup, and probably the best thermal performance out there to take things to the next level. All the components in the laptop converge together to make Strix Scar 15 a stellar offering. Asus makes several sensible choices to strike up a good balance between style, usability, and power. In the end, it is hard to not recommend this gaming laptop to anyone looking for top-of-the-line hardware and unparalleled performance. If budget is not an issue, then you should get the Ryzen 9 and RTX 3080 variant for Rs 2,49,990. Otherwise, one can also look at the RTX 3070 option for Rs. 1,54,990. The company will also bring a Ryzen 7 and RTX 3070 option at more affordable pricing in the coming weeks.

If you are not looking for a flashy design, then you can look at other options from the Asus ROG 2021 lineup. In case you are not an Asus fan then you can look at options from Acer with RTX 3060. However, beyond this, there is no other gaming laptop with the latest CPU and GPU combination in the market. So, if you are looking for other options then you will have to wait for some time.

Editors Note: Asus India shared the ROG Strix Scar 15 review unit with us for a limited time before the announcement.