Though most of the interesting content will be included in the paid season pass, the company has ensured that there is something for everyone. Let’s take a closer look at the content that Assassin’s Creed Valhalla players will get after the initial launch. Ubisoft has just revealed information about the content that it is planning to launch after the Assassin’s Creed Valhalla. Looking at the details for the post-launch content, if you plan to purchase Valhalla then you will be quite happy. Though most of the interesting content will be included in the paid season pass, the company has ensured that there is something for everyone. In addition, we will also get a “conflict-free” Discovery Tour next year. Let’s take a closer look at the content that Assassin’s Creed Valhalla players will get after the initial launch.

First up, let’s talk about the Valhalla season pass and the associated benefits. Ubisoft has priced the Valhalla season pass at $39.99 which is a considerable amount of change. However, players who opt for the season pass or purchase Gold, Ultimate, or Collector editions will get fresh content. The highlight of this post-launch content is definitely “The Legend of Beowulf” mission that will land alongside the game. In addition, the game developer and publisher will also release two expansions next year. The first expansion, the “Wrath of the Druids” is set to launch in the Spring of 2021. The second expansion, “The siege of Paris” will launch in Summer 2021. 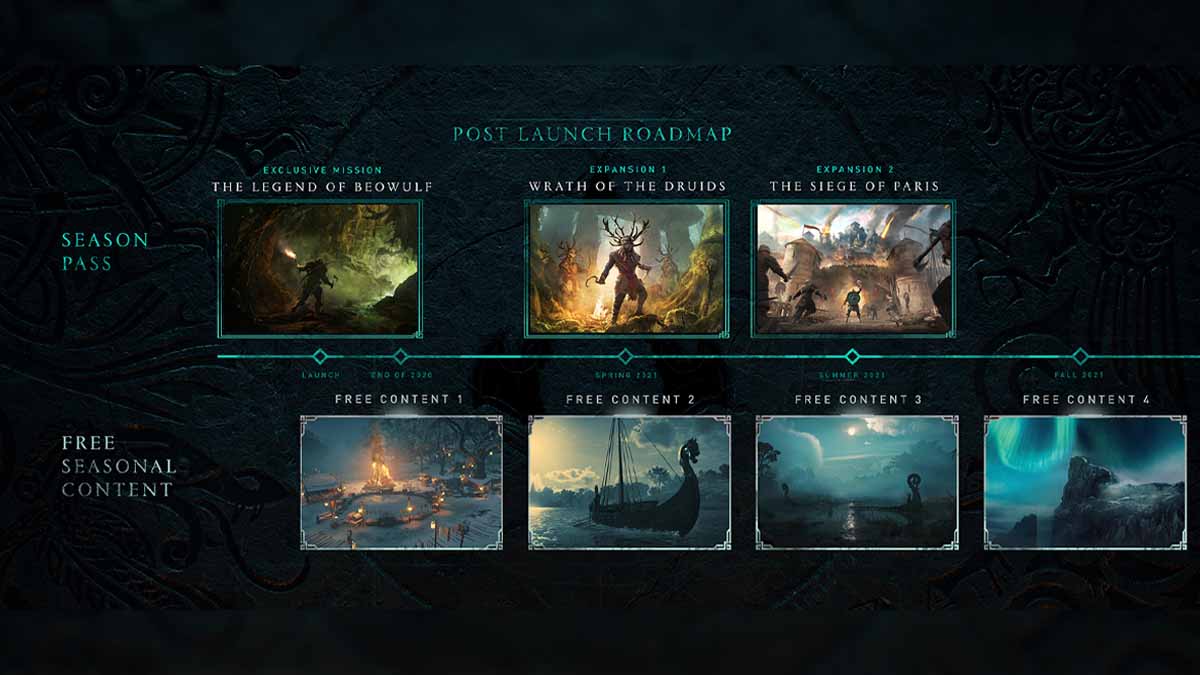 “Wrath of the Druids” will take the players to Ireland while the “Siege of Paris” will bring them to Paris. Beyond this exclusive content, the company has also planned multiple things for players with the base version of Valhalla. This includes the “Discovery Tour” mode, a new settlement area, “the Yule Festival”, the traditional Viking festival. Players will also get a new game mode called “River Raids”, additions of Ranks for “Jomsviking”. Beyond this, Season 1 of the game will also bring new abilities, player skills, weapons, gear, a longship, horse, and a raven.

In addition, Assassin’s Creed Valhalla developers also teased some plans for Season 2 that land next year. Looking closely, the company plans to launch Valhalla Season 2 in March 2021. As part of the teaser, the developers hinted at a new game mode that improved the “core combat experiences” available in Valhalla. Last but not the least, Valhalla players will also get a Season 3 and Season 4 as per the plans.