We also got a calendar listing all the upcoming in-game events for the season. Let’s check out all the added details around the Call of Duty Mobile here. Activision has just shared details regarding a new update for Call of Duty Mobile. This new update comes just a week after the company launched Season 12: Going Dark, its latest in-game upgrade. Looking at the new update, the company is rolling out “Knights Divided”, the featured event for this season. According to the announcement, the company will pit Team Red against Team Red in the battle. In addition, Activision noted that the season has a variety of events and playlist options with more content coming soon. We also got a calendar listing all the upcoming in-game events for the season. Let’s check out all the added details around the Call of Duty Mobile here.

Like past announcements, the company took to its official r/CallOfDutyMobile sub-Reddit to share the latest information. The dedicated post also outlined the feedback that developers have received along with bug reports for the game. Activision also included a “weapon design highlight” to display the work of a community artist. In addition, the developer also thanked all the fans for their support for Season 12 and its theme. Now, let's check the calendar along with information around the in-game events. Beyond the ongoing Going Dark TDM (Team Death Match), Hardcore collection, secondary school playlist, and seasonal challenges, two new challenges are starting today. These include the Knights Divided Featured Event and Fight Against the Clock Playlist. 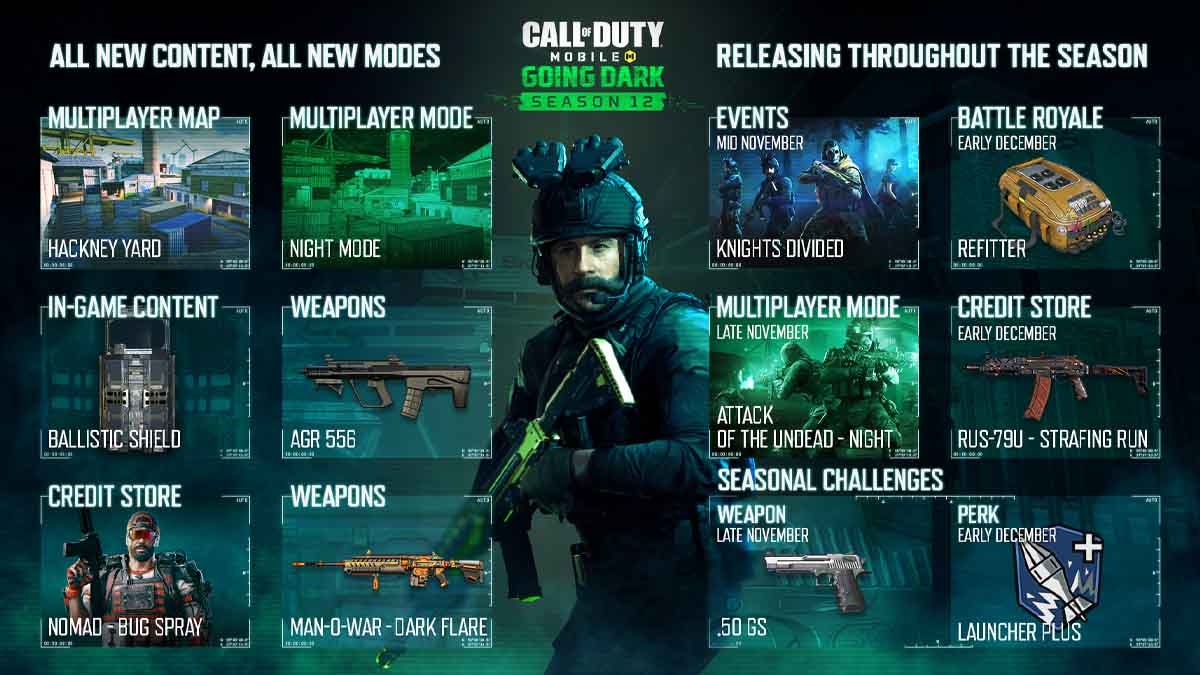 Activision is also planning to bring its 10v10 collection in Multiplayer on Nov 23 and Hackney Yard on Nov 25. The team also wrapped its “The Surviving Alcatraz” event for Battle Royale players. Beyond this, the company is planning to kick-start new events next week. We also got a poster for the Season 12 content roadmap including “Attack of the undead”, and Refitter Battle Royale class. We will also get a credit store update along with new weapons and perks.

Talking about the Knights Divided event, this is in line with the plot of the comics in the Battle Pass section. As per the comics, Ghost, Captain Price, and the rest of the crew are set to fight Mace and the Knights. This event asks the player to choose a side for the battle. The event will go on for 15 days and every 24 hours, a new territory will surface. One can check the rest of the details around the event in the official announcement post. Developers also noted that they will keep an eye on the feedback and issues considering this is a new type of event. Beyond the details around the different events, modes, bug reports, feedback, and community highlight, the company also added that it plans to announce something around Black Friday next week.