American computer hardware giant Dell has long established itself as a dependable brand when it comes to laptops in the Indian market. The company sells several laptop lineups that cater to the home, business, and enthusiast crowd across a wide price spectrum. When it comes to gaming, the company has two product lineups, the Dell Alienware series, and the Dell G series. While the Alienware lineup caters to the top-of-the-line no-compromise performance market, the G series takes care of the rest. The company launched its Dell G7 15 7500 line-up back in September 2020 with the latest internals available. 2021 refresh for the Dell G series is still months away so we thought there is still time to evaluate the current lineup. Here is our review for the Dell G7 15 7500 gaming laptop.

Before we dive into the review, let’s check the hardware specifications of our Dell G7 15 7500 review unit.

Variants and price in India Dell G7 15 7500 gaming laptop is available in two CPU configurations depending on the use-case. The base model of the laptop comes with an Intel Core i7 10750H processor, 16GB RAM, and 1TB SSD for Rs. 1,62,990. The laptop features an Nvidia GeForce RTX 2060 GPU with 6GB GDDR6 video memory to handle graphics. The second model features Intel Core i9 10885H processor with 16GB RAM, 1TB SSD, and RTX 2070 GPU at Rs. 2,07,990. Interested buyers can get both the variants on the Dell India website, Flipkart, Dell Stores, and other offline retail outlets. One should also note that the Intel i9 variant is currently not available on sale.

As with any gaming laptop that we test here, the first thing to focus on is the gaming performance. We tested 12 AAA titles on the Dell G7 15 7500 gaming laptop to gauge how your games will perform. The list of these video game titles that we tested includes Assassin’s Creed: Valhalla, Borderlands 3, Control, and Doom Eternal. It continues with Far Cry: New Dawn, Gears of War 5, GTA 5, and Hitman 2. We also tested Horizon Zero Dawn, Red Dead Redemption 2, Shadow of the Tomb Raider, and Troy: A Total War Saga. We did not change the settings of the games on launch and let the games decided the default settings. Inspecting the default graphics settings, most games defaulted to either Medium or High depending on the complexity of the title. The short version of this section is that Dell G7 15 7500 manages to offer impressive frame rates at 1080p. Here are the average frame-rates that we received in all the titles during our testing. 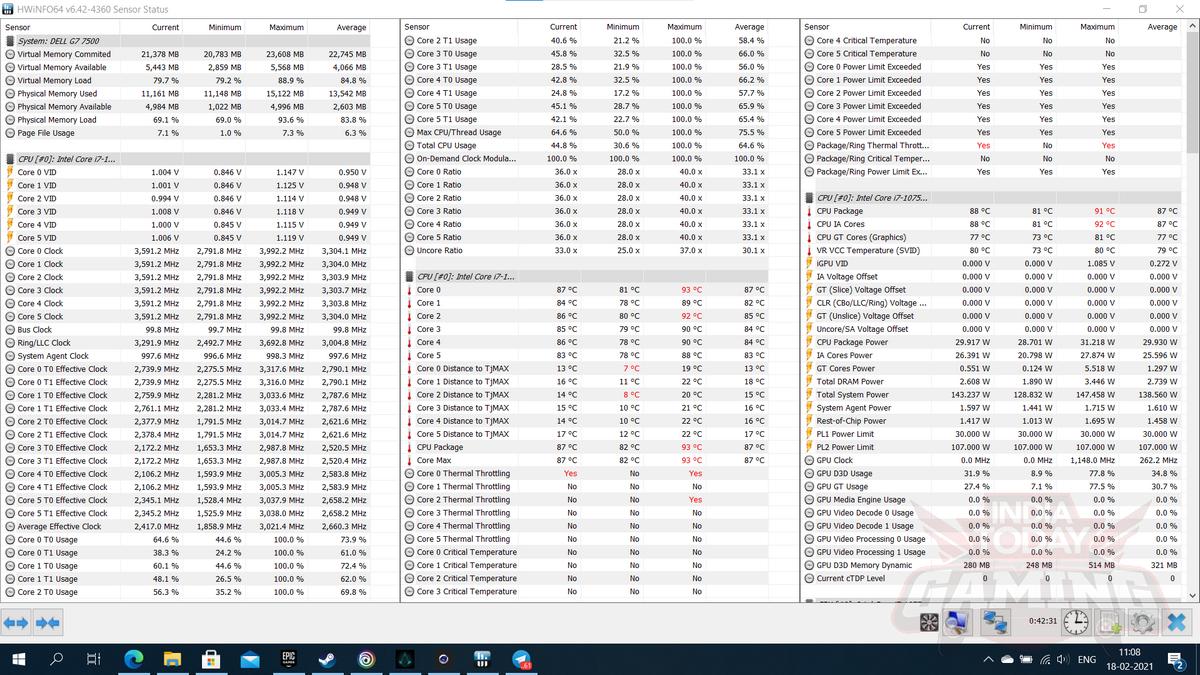 Looking at the software, the laptop offers four different thermal profiles in the “Dell Power Manager”. We conducted our tests in the default “Optimized” thermal profile but you can switch between Cool, Quiet, and Ultra Performance based on your needs. We could have achieved lower temperatures with the “Ultra Performance” mode. 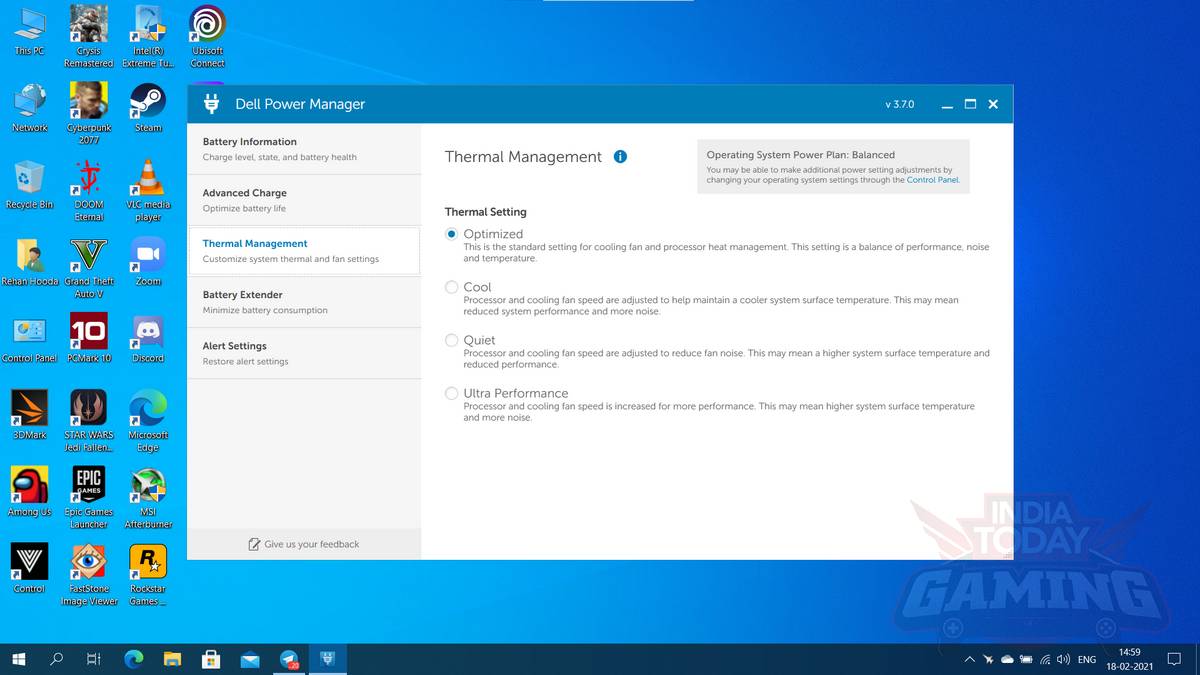 The laptop maker has also added a feature called “Game Shift” where one can switch to “Ultra Performance” mode with a dedicated key on the keyboard. This ensures that the player can maximize the fan speeds on the device while playing without going to the Alienware Command Center or Power Manager. Talking about the fan noise, it is not bad but you can still invest in a pair of earphones or headphones for a more immersive gaming experience. Dell has added a six-cell 86Whr Lithium-ion battery on the G7 15 7500 along with the quick charge feature. Similar to most gaming laptops out there in the market, battery life is not as impressive but that is a known trade-off. G7 17 offers about 1-1.25 hours of battery backup while gaming and about 4.5-5 hours on regular work. Beyond this, it took about 2 hours to charge the laptop from 0 to hundred after the initial boost in the first hour. This is similar to what we saw on the Legion 5i even if the G7 15 sports more demanding internals. The device comes with a 240W AC adapter to handle the charging duties. Talking about regular usage on the Dell G7 15 7500, the gaming laptop boasted the usual strengths for Dell. This includes a decent keyboard, a good design with flashy RGB elements, a large touchpad area, and a decent display. Dell has also added taken design inspirations from its Alienware lineup of gaming laptops for the hinge area on the device. Talking about daily use, the laptop features a boxy design with a user-configurable RGB strip on the body and a four-zone RGB keyboard. One can even turn-off the RGB to ensure that the laptop can blend in professional settings. On the software end, the laptop comes with Windows 10 Home and the usual Dell apps including Alienware Command Center, and My Dell. Buyers can use the Alienware Command Center to tweak the RGB LED strip around the device as per several baked-in effects. They can even specify effects according to specific apps or games. My Dell app lets the users keep an eye on their warranty, perform troubleshooting steps in case of a problem, or book repairs. The list of pre-installed apps also includes Dell Digital Delivery, Dell Update, Killer Control Center, Intel Graphics Command Center, and Dell Power Manager as mentioned above. Like any Dell laptop out there, the G7 15 7500 features a good keyboard with decent key-travel and actuation force. We also get a fingerprint reader on the keyboard for quick sign-in functionality. The layout of the keys is not standard given the limited space but it is easy to get habitual in a couple of days. Moving to the display, we get a 15.6-inch Full-HD LED Backlit panel with 300-nits brightness. Dell has also added an anti-Glare coating on the display but the highlight is likely the 300Hz refresh rate. Finally, it features an okay pair of dual speakers and a webcam which do their job, nothing remarkable. The Dell G7 15 7500 is one of the more surprising Intel-powered laptops that I have tested in a while. This machine puts emphasis on things that are essential for a gaming laptop which includes thermals and a high refresh-rate display. The laptop manages extremely impressive thermals over extended periods of gaming with a 300Hz refresh rate display. In addition to packing a decent combination of 10th generation Intel i7 CPU with Nvidia GeForce RTX 2060 for good performance in almost all titles. As mentioned in our last review about the Lenovo Legion 5i, gaming laptops with next-generation hardware are still months, if not weeks away. Considering the situation of the stock and the increased demand regarding gaming hardware, it is better to get good offerings instead of waiting for unreleased hardware. Going back to the Dell G7 15 7500, there are no deal-breakers out there. It has got the design, performance, and RGB to back its gaming credentials.

To re-iterate, Dell G7 15 is a great option if you don’t want to wait for 11th gen Intel chips and Nvidia RTX 3000 series GPUs. If you are not looking for Dell then you can hardware from its competition. Some of the noteworthy options include the Lenovo Legion lineup, Asus ROG Zephyrus G14, MSI GS series, and more.

Editors Note: Dell India shared the Dell G7 15 7500 review unit with us to test the prowess of the gaming laptop.