Looking at the hardware and pricing, it looks like Lenovo is taking on its competition in the somewhat affordable range. Let's check how it performs in our review for the Legion 5i with Intel Core i7 10750H and Nvidia GeForce GTX 1650 Ti. Computer hardware giant Lenovo launched its latest lineup of Legion gaming laptops last year in the Indian market. The company refreshed its hardware with the latest Intel CPUs and Nvidia GeForce GTX and RTX GPUs at the time. It launched three Legion products as part of the lineup including Legion 7i, Legion 5Pi, and Legion 5i. Looking at the hardware and pricing, it looks like Lenovo is taking on its competition in the somewhat affordable range. Right around the launch of 11th generation Intel Core processor-powered gaming laptops, we got a chance to test out Legion 5i. Here is our review for the Lenovo Legion 5i with Intel Core i7 10750H and Nvidia GeForce GTX 1650 Ti.

Specifications for the Lenovo Legion 5i

Different variants and price in India Before we talk about the gaming performance, let’s cover the pricing for the different Legion 5i variants. The base model of Lenovo Legion 5i starts at Rs 73,990. Interested buyers can spec out their laptops with multiple configuration options. The top-of-the-line laptop available on the website will cost buyers Rs 1,02,990. Looking at the configuration website, the company is offering seven “Ready to ship” models and one “Build Your Own” option. We got the top-of-the-line model with GTX 16050 Ti GPU with 82AU0072IN model number. In addition, some of the configurations also come with a free Lenovo M300 Gaming mouse in the box. The price of the unit is Rs 98,489 at the time of writing.

Lenovo has done a good balancing act between the hardware and the pricing on the Legion 5i. It is mostly in line with offerings from Dell, Asus, and HP. Spec-wise, some models from Acer may appear better on paper with a more powerful graphics card. However, the Nvidia GeForce GTX 1650 Ti is good enough for casual gaming at medium to high graphics settings. The inclusion of a 120Hz display panel completes the package for anyone looking to experience a smoother gameplay experience. The Intel Core i7 10750H processor complements the GTX 1650 Ti and the 120Hz refresh rate panel to offer an impressive gaming performance across the board. 10750H ensures that the Legion 5i is not limited by the CPU when it comes to the gaming experience. The laptop managed to offer decent, playable framerates for most AAA titles across the board. We tested 12 different video games to gauze the gaming performance of Lenovo Legion 5i. The list of the games includes Assassin’s Creed Valhalla, Borderlands 3, Control, Doom Eternal, and Far Cry New Dawn. We also tested Gears of War 5, GTA 5, Horizon Zero Dawn, and Red Dead Redemption 2. The benchmark section also includes results on Troy: A Total War Saga, Hitman 2, and Shadow of the Tomb Raider.

Thermal performance of Lenovo Legion 5i

As it goes with any gaming laptop, offering a good gameplay experience is just one half of the complete picture. The second half of the picture is usually reserved for the thermal performance of the laptop. This part includes how hot and loud the laptop runs depending on the graphics quality you want. It obviously will depend on the ambient temperature around the laptop. However, this is also the most nuanced and complicated part of the Lenovo Legion 5i. 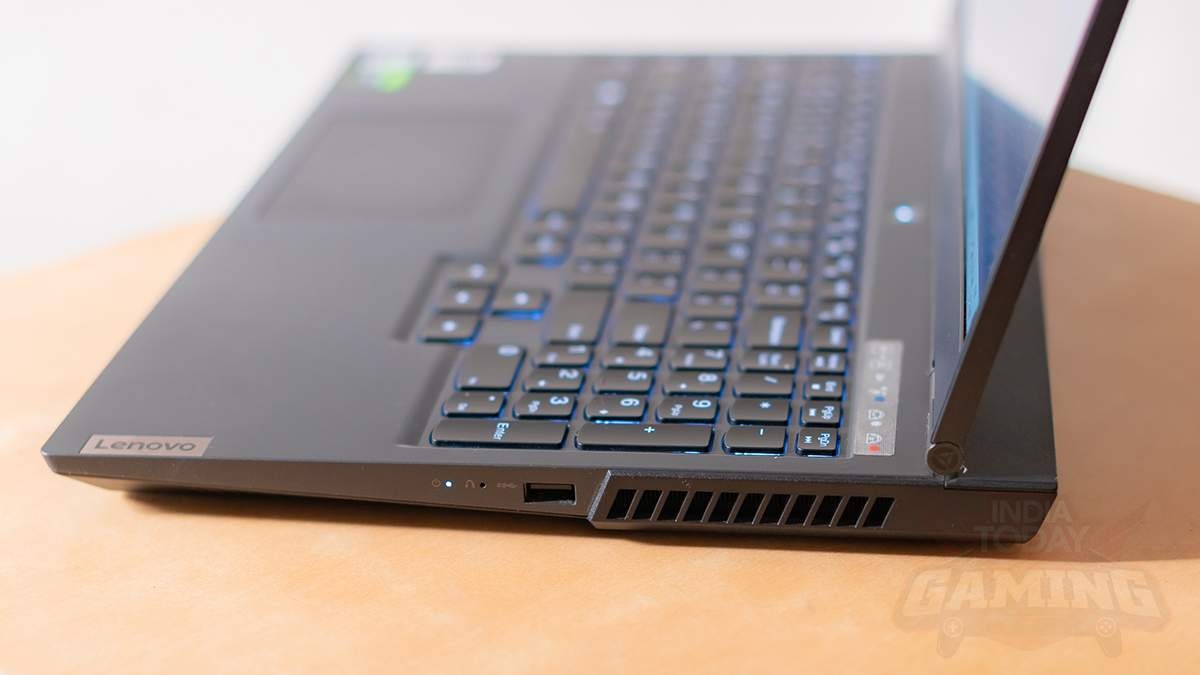 Out of the box, the Legion 5i comes with fans cranked to the max. This results in fan noise that is distracting at best and a deal-breaker at the worst. The problem here is that the fans would ramp up without a proper fan-curve during easy tasks like opening Word. However, one can tune it down to make the laptop experience much more user-friendly, and better without any adverse performance-impact. This is as easy as changing the “Thermal Mode” of the laptop in the included Lenovo Vantage app. The default mode is set to “Performance”, but users can switch it down to “Balanced”, or “Quiet” depending on their needs. However, regardless of the default “Thermal Mode”, the CPU easily reached a maximum of 99 degrees Celsius and thermal throttled. Though, despite the thermal throttling, Legion 5i managed to prevent any significant dips in gaming performance. The robust thermal design also aids the laptop in offering this level of performance. It is worth noting that one needs to ensure that the laptop has ample breathing space to operate at its peak. To conclude, if you want the best gaming performance for your money, leave the laptop at “Performance” Thermal mode with enough ventilation. However, you do need to invest in a decent pair of earphones or headphones to drown out the fan noise.

Battery-backup on gaming laptops is something that still needs massive improvements to reach a respectable level. Both Intel and AMD have tried to work on this aspect through different methods. Intel has beefed up its integrated graphics with its latest Intel Xe Graphics to stop relying on a dedicated GPU to save power. On the other hand, AMD offers chips that are quite conservative in performance and boost while on battery. AMD does make it up with the number of cores and threads. However, none of these aspects work in favor of the Lenovo Legion 5i. This is because it comes with a 10th Generation Intel processor instead of the latest 11th Generation lineup. 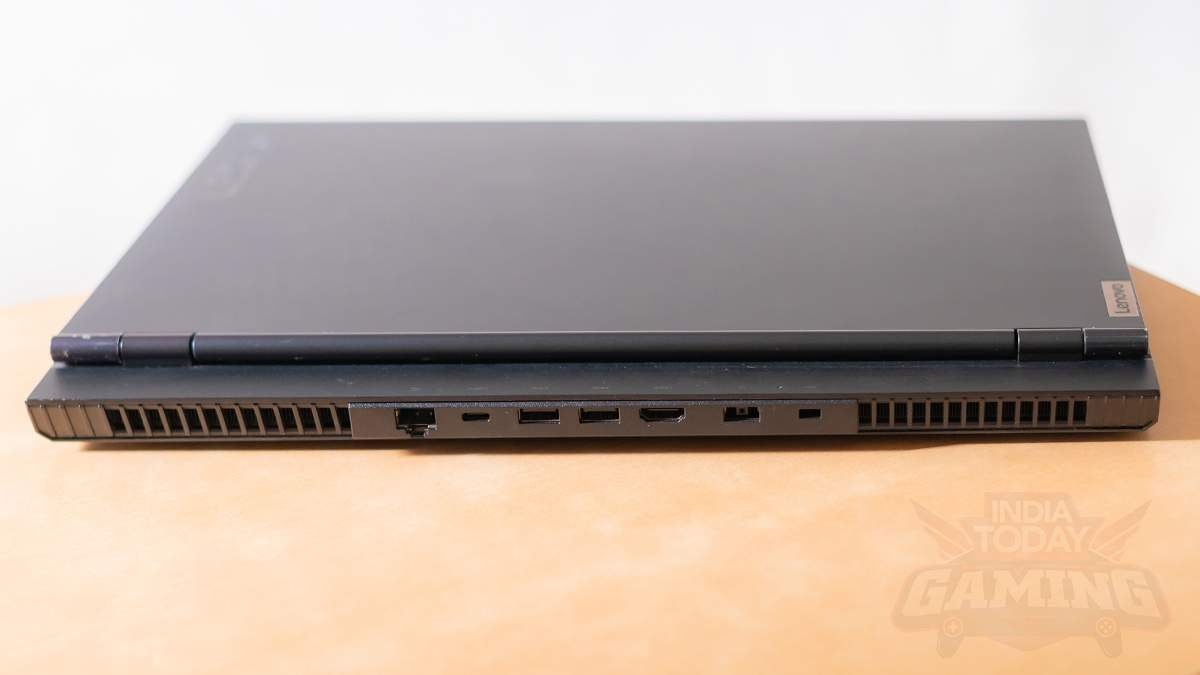 Legion 5i offers about 4.5 hours of battery backup on light usage and about 2.5-3 hours on heavy use. The heavy use comprises of web browsing on 25-30 tabs, Adobe Lightroom Classic to process 15-20 RAW images, Photoshop work, and more. Unsurprisingly, while gaming, the numbers drop to about an hour with a massive hit on performance and boost clocks. So, like most gaming laptops in the market, gamers must plug the laptop in to get the best performance possible.

Daily use: Design, Software, Display, Audio, Keyboard, and the camera

Legion 5i comes with a familiar design that we have already seen in its predecessors. Lenovo has not changed the design as it has worked well to offer good thermal performance. So, it is good that the company followed the “if it isn’t broken then don’t fix it” approach. The somewhat plain, stealth design of the laptop makes it ideal for both professional as well as casual settings. Build-wise, the laptop is a bit bulky despite the full plastic build. Looking closely, the company has used high-quality plastic to offer solid build quality. All this works in favor of the laptop when it comes to the performance department. One can attribute this bulk to the internal cooling system, vents on the side, back as well as the bottom. Looking at the software, the laptop comes with Windows 10 Home, some bloat-ware apps, and Lenovo Vantage. Users can use Vantage to take control of almost all aspects of the laptop including thermals, security, and troubleshooting. The 15.6-inch IPS display with FHD resolution, 120Hz refresh rate, and 250nits peak brightness works fine in most conditions. It is not worth writing when it comes to the image quality or brightness. However, the 120Hz refresh rate is one aspect that gamers would care about and it completes the package. Like the display, the 720p HD webcam is passable at best. Not the best but enough to get by on a gaming laptop. Lenovo makes up for the ordinary parts by adding a stellar back-lit keyboard and loud, decent speakers on the laptop. The company is known for adding great keyboards to its ThinkPad lineup, so this is no surprise.

The next generation question?

All said and done, it is natural to ask about 11th gen Intel CPUs and Nvidia GeForce RTX 3000 GPUs. Intel, Nvidia, and even AMD launched their latest products on the global stage at CES 2021. Lenovo refreshed its Legion lineup with the latest Intel CPUs and Nvidia GPUs. However, the laptops are still a few weeks away from launch in most parts of the world. The company has not even shared the launch timeline for the newer Legion products in the Indian market. The delay and uncertainty are similar across the board regardless of the laptop brand. So, if anyone looking at a new, slightly-affordable gaming laptop right now, 10th generation Intel CPU equipped laptops are the way to go.

Verdict: Should you purchase Lenovo Legion 5i? 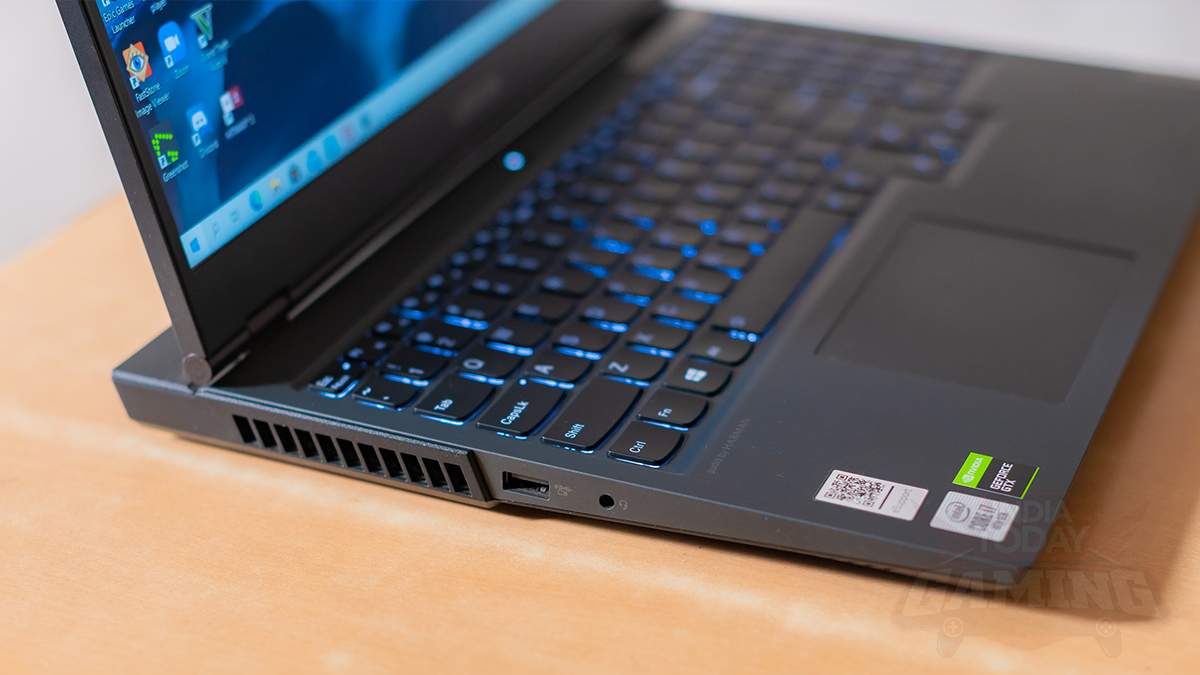 Lenovo Legion 5i is an impressive, pocket-friendly deal for anyone looking to purchase a gaming laptop currently. The unsuspecting, less-flashy design of the laptop along with good performance makes it ideal for most uses. There are some shortcomings like the out-of-the-box fan setting and the on-paper outdated specs. But none of these issues is a deal-breaker for anyone looking to purchase a solid, budget gaming laptop in January 2021.

If you want something better with gaming at the highest quality and FPS possible then this is not the laptop for you. You need to look for gaming laptops with better GPUs for your requirements. If you are looking at something beyond Lenovo, then there are several competing gaming laptop makers in the market. These include Dell with its G7 series, Asus with its TUF lineup, MSI with its GS series, and more.

Editors Note: Intel India shared the Lenovo Legion 5i review unit with us to test the prowess of its Core i7 10750H.