nCore Games Studio shared the announcement on its official Twitter account. Let’s check out everything that we know about FAU-G: Fearless and United Guards here. nCore Games Studio has just made a new announcement regarding its much anticipated and hyped game FAU-G. As per the latest information available online, the company has just listed the upcoming smartphone game on Google Play Store. This new listing offering interested players the option to pre-register for the game so that they can be notified when the game launches online. The listing clarifies that the complete name of the upcoming game is “FAU-G: Fearless and United Guards” along with the official logo. nCore Games Studio shared the announcement on its official Twitter account. Let’s check out everything that we know about FAU-G: Fearless and United Guards here.

The company highlighted that this announcement comes “on the auspicious occasion of Gurupurab”. Looking at the listing, the description of the game outlined that the plot would focus on “an elite fighting group”. Players will join “a special unit of FAU-G commandos” patrolling in the “border territory”. Digging further, the description notes that the story will take place on the “northern border” of the country. In addition, players will “come face-to-face with” the enemies of the country. As part of the missions, the players will take on “hostile invaders on Indian soil”. The player takes on the enemy while paying heed to the “unforgiving terrain”. As noted in a previous report, the company confirmed that the game will be “based on real-world scenarios”.

On the auspicious occasion of Gurupurab, we are starting the pre-registrations of FAU-G: Fearless And United Guards. Pre-register and be the first to play the game. #FAUG #BeFearlessPre-registration link: https://t.co/4TXd1F7g7J@VishalGondal @akshaykumar #happygurupurab

In addition to this, the listing also likely hints at the possible in-game graphics of the game. Looking closely, the game developer and publisher has added three screenshots as part of the listing. The second screenshot in the listing appears to be a screenshot of the home page of the FAU-G: Fearless and United Guards game. 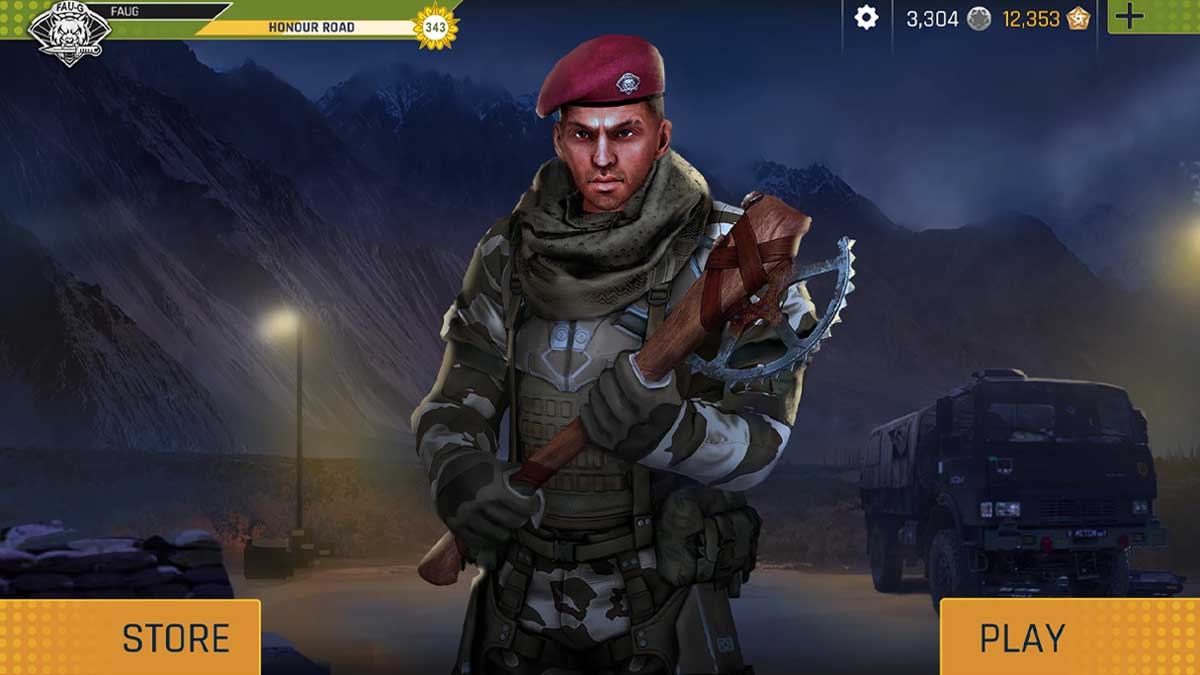 The supposed home page showcases your primary character along with the options to “Play” on the bottom-right corner. In addition, the bottom-left corner highlights a shortcut to the in-game “Store” for possible in-game items and accessories. The top-left corner showcases the customizable logo of the in-game “FAU-G” unit along with something called “Honor Road”. Though the company has not shared any details, we can only speculate that it is an in-game progress system. We can also see two numbers on the top-right corner of the screen possibly indicating two different in-game currencies. The third screenshot appears to be a concept-part of the game while the first could be the loading screen.