The company also promised to better manage the expectations of the gamers in the future. Let’s check all the details around the changes that CD Projekt Red shared also with the Digital Scapes acquisition. CD Projekt Red, the Poland-based video game studio and developer has just shared major changes in a new announcement. It shared a 24-minute-long video to outline changes for this new version of the studio called Red 2.0. This comes just weeks after the developer suffered a major Ransomware attack and months after the disastrous Cyberpunk 2077 launch. The highlight of these changes is likely how the studio will develop video games in the feature. In addition, it also reaffirmed updates for Cyberpunk 2077 and The Witcher this year.

Besides the changes, the game developer also promised better marketing for future games to better manage the expectations of the gamers. It also promised to focus on “the well-being” of its employees along with “development opportunities”. Finally, it has also acquired Digital Scapes, a Canada-based studio to create CD Projekt Red Vancouver. Let’s check all the details around the changes that CD Projekt Red shared also with the acquisition.

The first major change of transforming information around video game development includes changes to the development of the REDengine game engine. For some context, REDengine is the in-house proprietary game engine of CD Projekt Red. The game studio will “improve and centralize” the REDengine technology. This will be part of the studio-wide reorganization to allow “a set of interdisciplinary agile teams” to develop “multiple AAA games and expansions in parallel”. The studio stated that REDengine will serve two franchises as part of the reorganization which includes Cyberpunk 2077 and The Witcher. REDengine change will come in effect from 2022 and it can likely ensure that the studio avoids performance issues that it faced during the Cyberpunk 2077 launch. The studio stated that “quality” will remain its top priority, a tall promise considering recent events. In addition to these changes, the studio reaffirmed its focus on the single-player RPG genre. CD Projekt Red knows the “huge potential” of Cyberpunk 2077 and The Witcher series. 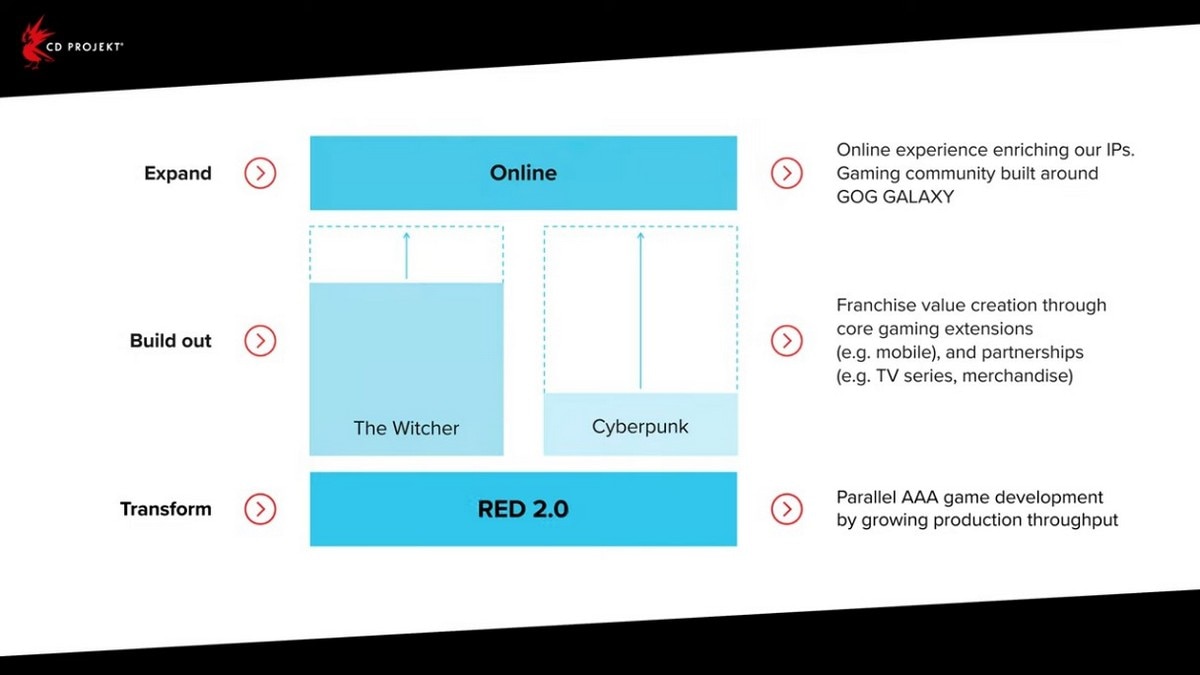 Besides the regular updates, it will work on expanding its reach to “new areas, media, and content types”. This includes a towards “Genre-blending” AAA video games with an online element built-around GOG GALAXY and a focus on expanding the IP. The IP expansion part likely includes new titles in the smartphone gaming space and things that go "beyond gaming". These including anime, music, comics, books, and more. Digging further into the announcement, the studio promised that it will change its marketing strategy for future releases. These changes will make the campaigns shorter, take place closer to the “actual release” of the game, and showcase performance “on all supported hardware platforms”. It will also share a roadmap of the releases every year to keep fans, and players informed about plans. The game developer wants to “manage expectations” properly with these changes along with the focus on “polished game footage” instead of concepts.

CD Projekt Red also shared that it will focus on a “sustainable and caring work environment” for its employees. As part of this, it will focus on “scaling” its talent pool, while maintaining diversity and inclusive nature. As noted above, the studio will also offer its employees, opportunities for personal and professional growth. It wants to ensure that the workplace is comfortable, open and empowering for employees.

As part of the announcement, the game developer stated that it will also focus on mergers and acquisitions in the coming years. At the same time, the studio also announced that it has acquired Digital Scapes, the co-developer of Cyberpunk 2077 to create a new Canada-based studio. CDPR is calling this new studio, CD Projekt Red Vancouver.